The Silesian Voivodeship is one of the most interesting and the most attractive region in Poland. It’s landscape is diverse in many respects: geographically (here coincide terrains belonging to The Kraków-Czestochowa Upland, Silesian Upland and Beskid Mountains), economically (next to Upper Silesian Industrial Region we’ll find typically agricultural areas), culturally, ethnically and religiously.
Silesia, a part of region here described, does not deny its industrial traditions. On contrary, these traditions constitute to its pride. Worth visiting is, for instance, the Black Trout Adit in Tarnowskie Góry, where you can feel the thrills and take an underground tour by boat, while watching wonders jealously guarded by Skarbnik (The Treasurer), the legendary mine ghost.
This region does not lack natural attractions and preserves, either. Nature lovers will gladly visit the Łężczok reserve to see birds in their natural habitat. Trekking enthusiasts will reach the beautiful Beskid Mountains or the trail of the eagle’s nests, and those who seek spiritual nourishment will find it not only in The Sanctuary of Our Lady of Jasna Góra in Czestochowa, the most famous Polish sanctuary, but in numerous other places of pilgrimage scattered across the whole region as well.
Polish history lovers will choose the Castle in Mirów, Pszczyna and in various museums admire relics of the past.

The Silesian Stadium in Chorzów is one of the “legends” of Polish football. The idea of building the stadium appeared in the interwar period, but it was not until the 50s of the last century, when it was erected. Once it was opened in 1956, it was the largest facility of its kind in the country. It could accommodate more than 100,000 spectators.
Chorzowski’s hosted the most important sporting events in Poland, from the representative and club football matches (here Poland won against the USSR in 1957, won England in 1973, and victory with Belgium, in 2007, sealed the first ever promotion to finals of the European championships). The Silesian Stadium in Chorzów also hosted prestigious speedway and cycling competitions as well as athletic games. In 1991, the first big rock concert took place at the stadium – the AC / DC team then played. Later Metallica, The Police and U2 bands visited.
In 2017, a long-term reconstruction ended. As a result, the Silesian Stadium in Chorzów has nearly 55,000 seats and a roofing.
The Silesian Stadium in Chorzów is open to the public. As part of the tour, tourists will enter the stadium’s main arena, pass the competition tunnel to the locker room, and watch the exhibition “The Power of Emotions. Silesian Stadium 1956-2017 “and visit the police station located there.

The Silesian Park, until recently known as the Regional Park of Culture and Recreation, is called “green lungs” of the industrial agglomeration. It covers more than 600 acres and it’s 2 times bigger than famous Central Park in New York, and 4 times bigger than Hyde Park in London. Everyone will find here something for themselves, from relaxing walks to mass events. There are many attractions in the park , such as: the Planetarium (the largest and oldest in Poland), the Upper Silesian Ethnographic Park, the Silesian Stadium, the Legendia Silesian Amusement Park (the largest in Poland), and the Rose Garden (with biggest rose collection in Poland), Exhibition Hall “Kapelusz” (in polish: “hat”), narrow-gauge railway and Silesian Rope Park. 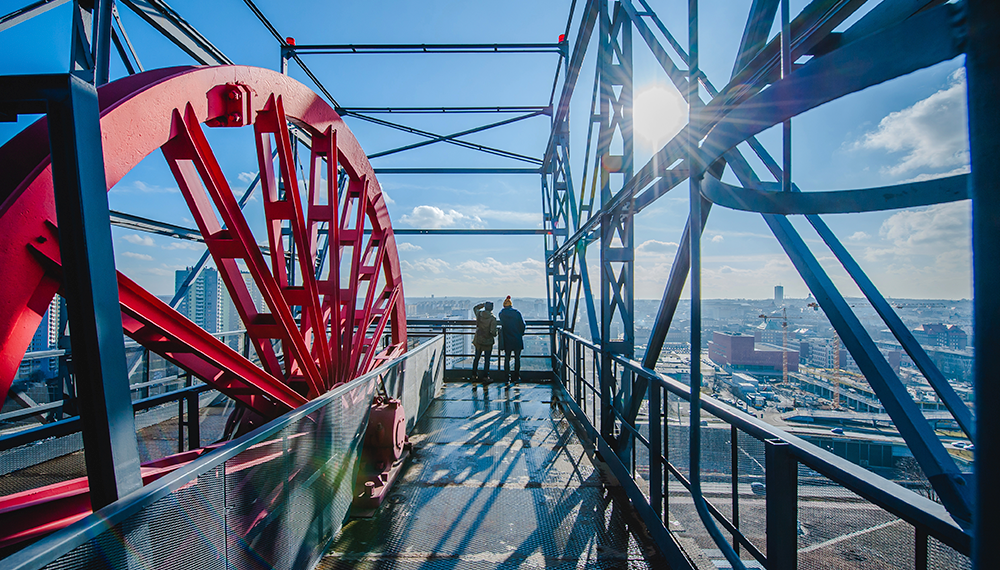 The complex of buildings of the Silesian Museum, situated in the former Katowice coal mine, along with other institutions which are being built here will create the so-called Cultural District – the new centre of cultural life for the city. The coal mine “Katowice” operated from the third decade of the nineteenth century until the end of the last century. In total, about 120 million tons of coal were mined. Characteristic old buildings have remained of the mine, many of whom were built as early as the nineteenth century, and each individual building was given the features inspired by the Romanesque and Gothic styles. Currently, the mined area was adapted by the Silesian Museum for its new seat.
Modern structure, designed by the Austrian studio Riegler Riewe Architekten of Graz, was aimed at making the most of space beneath the surface of the ground, and intended to intrude as little as possible on the post-industrial landscape of the region. Most of the exhibitions will be located in underground halls and the historical landscape of the city is enriched merely by glass boxes which illuminate the interiors of the museum. Glass boxes allow visitors to see exhibitions in the daylight, even though they are located over 14 metres below ground level. The main part of the architectural complex of the Silesian Museum (T. Dobrowolskiego Street 1) is a seven-storey building, of which three storeys are underground. Level P-2 will host exhibitions of Polish painting 1800 – 1945, of Polish painting after 1945, and of Nonprofessional Art. Level P-4 will host the following exhibitions: History of Upper Silesia, Silesian Sacral Art, Centre for Polish Scenography and temporary exhibitions.
Here is located the “Warszawa” hoist tower of the former pit shaft, on which a panoramic lift is mounted. There you can see the panorama of the city.

More information about the region you can find on The Silesia Travel portal https://www.slaskie.travel/en-US.

Stay with us on a regular basis